About a month ago, my husband’s aunt asked if I’d be interested in an old hoosier cabinet they had been keeping in their basement. Of course I couldn’t turn it down. You kidding? So we brought it home.

This thing has a story…some if which I know, some of which I’ll never know. They had gotten this cabinet when they got married (no telling how old it was when they got it) and had it stripped because they wanted to stain it (it had previously been painted white). But, when they saw the wood wasn’t a pretty wood that would look good stained, they never got around to refinishing it. It had been used as a craft station with their kids when hey were younger, but was now just in the way.

So we brought it home (we really needed more stuff to move once we finally buy a house). At first glance, the cabinet was in good shape. But a closer look showed the plywood on all sides was peeling. I had two choices…paint the peeling plywood, I go ahead and replace it. The reason this thing is still a work in progress is because I chose the latter.

This has been a nightmare. I’m VERY impatient. This cabinet has tried and tried my patience. If I didn’t love it and know it can be made beautiful, I would have given up already.

The original piece was a mess of wood glue…EVERYWHERE. So when I pried the side panels off, most of it was still stuck where it had been glued. This caused the replacement plywood not to line up right. Screw that. If It won’t line up right anyway, then I’m using beadboard (even though it’s thicker than I need) because it’s pretty and I’ve been wanting to use it on something.

Beadboard was about 0.3xx inches thick vs ¼ inch plywood. So now nothing’s lining up right (already stated) and you can see the edge of the beadboard (which is like plywood) and that’s ugly. I also had to put more wood on the top to cover up the peeling plywood there, too. I didn’t want you to see the plywood edge, so I put like five layers of wood putty over and over and over. That didn’t work. (This is the part where I get frustrated and cry…no big deal…it’s all part I the process haha.)

Dad came to the rescue and we went shopping for moulding to cover up my mess. Good ole dad always saves the day. We added the moulding around the edges where the plywood was showing and I put a coat of paint on her.

And that’s as far as I’ve gotten in about a month. And that’s only the top half. That’s sad. I hope to make major progress this week and bring you part 2 of the project. We will see what happens. I’ve still got to make shelves for the top and reinstall the “garage door” looking thing (I don’t know the technical term…something about a bread box???)

As for the bottom, it’s got a long way to go.

I promise I will have part 2 for you soon! 🙂

« Getting out of my box
Hoosier cabinet part 2 » 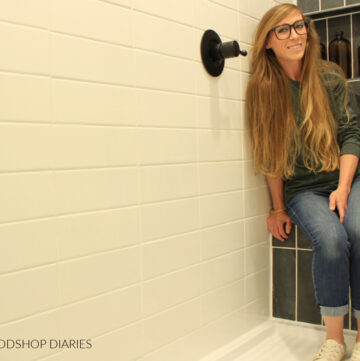 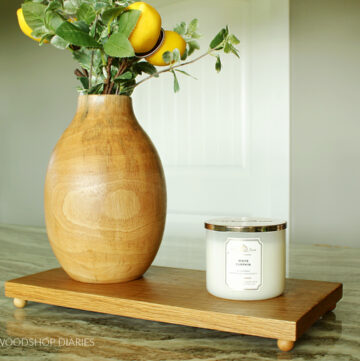