In this post, I’m sharing how to build a simple DIY accordion coat rack perfect for hats, coats, umbrellas, dog leashes, or even for stockings to hang during the holiday season!

This is a great little scrap wood project that you only need a few tools and a few small boards for!

My favorite part about it is that it’s adjustable–like it actually moves like an accordion! How cool?!

These used to be popular many years ago and they kind of went away, but they’re making a come back and I’m giving it a little modern spin with this project.

First, I used my miter saw to cut down 1×2 scrap wood to:

Then I laid them out on my workbench to get a visual of where I was headed with this project.

I separated this project into two SETS of boards…each set consists of two long and two short boards.

I was attaching everything in the end with 2 ½” wood screws.  So I found a drill bit JUST SLIGHTLY larger than the screws I was using so that the screws would be able to drop through the hole.

Then I drilled holes on the marks I made on the ends and the middle of the first set of boards.  These holes should be just large enough to allow the screw to drop in like shown.  These will be the BACK pieces on the rack when it’s assembled. Then, I set them aside.

Then I measured and marked the same locations on the second set of boards and drilled a hole just SMALLER than the screw (so I was just predrilling) in them.  But, I ended up having to redo all these holes later when I assembled it, so this isn’t actually necessary. Just simply measure and mark the same locations, but skip drilling the holes.

Next, I trimmed my dowel rod down to ten pieces 3” long.

You can leave these as is, but I spray painted them black because I really like the walnut and black combination 😊

Once the paint was dry, I applied wood glue and glued these onto the marks on this second set of boards.

After allowing the glue to dry completely, it was time to put it all together.  I laid the rack out on my workbench to make sure I was attaching everything like it was supposed to be. This design was confusing to me throughout this project and I had to keep laying it back out to get a visual haha.

Then I screwed the rack together with 2 ½” wood screws through the holes I drilled earlier in the back.

Remember me talking about in step 3 how I had to redrill all the holes in the second set of boards, so don’t bother with it before? This is why…Many of these holes didn’t line up perfect as you can see.

So I ended up placing these boards so the edges were flush and predrilled the small holes through the back boards and into the front boards where they should have been.  Then I drove the screws.

I drove the screws tight, then backed it out JUST ENOUGH so that it would still move a little since it was an accordion rack. Since the holes in the back are larger than the screw, it allows the screw to move freely, but still keep the pieces fairly tight together.

I continued along the rack predilling and driving the screws until I had the entire thing together.

I was careful to drive the screws tight, then slightly back each screw out so that when I got finished, it would move like an accordion. See the video here 😉

Once I was happy with the assembly, I finished it with a beeswax.  I quickly realized it would have been ten times easier to finish this BEFORE putting it together but at this point I wasn’t going to take it apart haha.  So I just powered through it.

In order to hang this on the wall, I used a few of those teeth looking wall hangers…I don’t know what they’re called.  I installed these on the outer two top corners like shown.

Also, the nails that come with these are TINY and I always smash my fingers holding them to get them started with a hammer.  So I found that using these needle nose pliers can save your fingers and make this SO MUCH EASIER.  Just a helpful tip 😉

Then I used a couple of nails in the wall to hang it.  Because it’s an accordion, I can adjust as needed and install wall anchors, or adjust it to where it will hit a stud on both hangers.  It fits perfect right here next to the front door and will be cute for stockings this Christmas and coats all winter long.  And in the summer, I can swap it out for hats, or umbrellas, or whatever I can find to hang here haha.

If you’d like to make one for yourself, be sure to check out the video tutorial before you get started to see how it all came together. And if you aren’t already subscribed to my YouTube Channel, be sure to head over and subscribe so you don’t miss out on whats’s coming next 🙂

And if you liked this project and want to save it for later, be sure to pin it!

Until next time, happy building 🙂 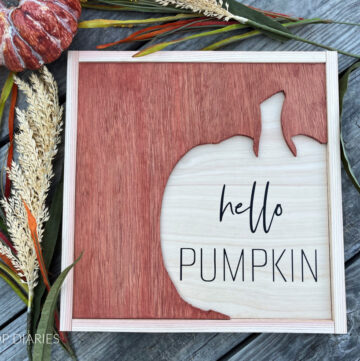 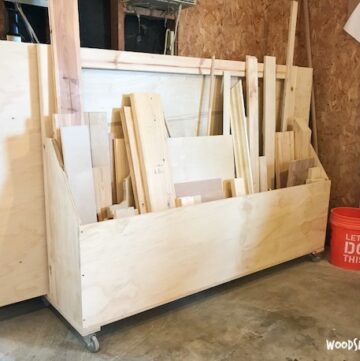 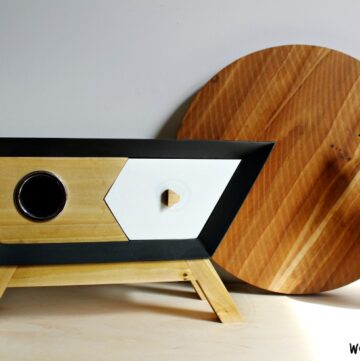