It’s been over a month since my last blog post. I keep doing this….waiting month(s) between posting something new on here. I have been SWAMPED with projects since my last post, but the problem is that nothing I’ve worked on is really finished and who wants to read about my half finished projects? Umm no one. So I don’t bother you with it.

Until now. Now I’m going to let you in on the last month’s worth of stuff I’ve done, am doing, have been thinking about doing. I don’t feel like I have enough stuff completed to write a post dedicated to one project, so let’s just talk about everything. Sound good? Probably not, but I’ve already written it so you might as well read it, right?

Since my table was completed, I reupholstered my favorite yard sale find:

By the way, the pillow cover was made from drop cloth and painted with acrylic paint…neat, right?

I rearranged my living room:

Let’s see, oh yes, the deck. As Memorial Day came and went I realized outside of our house is awesome…the sun is there, the wind is there, the pool is there, and we have a decent view off our back porch. But, our deck was filthy…green and dirty, old and weathered. Just generally neglected. See? Yuck….

Long story short, I spent DAYS and weekends scrubbing and bleaching the deck. It was awful. I don’t even have an after picture, but I assure you, it’s now so clean you can eat off of it. Then I spent a weekend staining it…again no after picture, BUT you can see it here:

I am still working on the deck rails. Once I’m finished, I’ll do a final reveal on that. PSA: Don’t EVER paint deck rails with a paint brush. It takes at least 17,564 hours PER COAT. Seriously. I never exaggerate.

Referring again to the picture above, that’s another thing….our deck had no furniture, so I worked on making some adirondack chairs, lounge chairs, and a picnic table with benches. I haven’t finished laying out my deck and porch yet, but here’s at least a picture of them on the porch:

One reason I kept putting off posting these on my blog was because I haven’t decided how to arrange them on my deck. I was going to make a little “coffee table” to put between the chairs and then I thought about making a loveseat and then I wanted to decorate some. Then I rearranged it all…It never ends….if I wait until I “finish,” I’d never ever post anything. Almost finished projects must be good enough for now 🙂

Speaking of almost finished, I still haven’t finished our kitchen. We have yet to put on backsplash and my table chairs are still not finished being painted. I still have to put outlet covers on and covers on the ceiling where we cut holes for lights then decided no to put any lights there. Oh and we need moulding on the floor in two spots where it goes to the living room. These little things never seem to get done. But I can’t say the kitchen is finished until they are!

Good news is that we started on the backsplash AND I finally finished making my chair cushions:

I redid the hallway trim and painted…but once again, I haven’t finished my final touchups on the paint so I didn’t want to “reveal” it yet, but here goes:

Nice pose right? I know I’m such a goob, but whatev…It makes a good blog pic :). Notice the closet there? I still need to write a post about it…note to self. Don’t you think it’s adorable? Maybe not, but it’s much better than looking at a door 🙂

I’ve also been redoing my workshop. I want to write a big post about it, so I’m saving that for later…keep your eyes open because I’m excited about that one!!

So, see? I stay busy constantly, but it’s not always post-worthy. Or maybe it is, i just don’t have enough details or pictures to make a whole post. Or I don’t think you’re interested in whatever I’m doing. Either way, I vow to try my best to not keep waiting until I finish a project completely before posting about it. You just have to promise not to judge me if every little thing isn’t in it’s place or has it’s final coat of paint 🙂

I Have an Announcement to Make 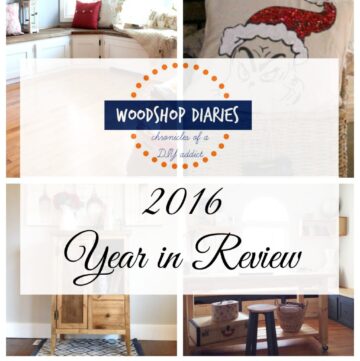